TOUCHING MY TOES is our tallest and longest-bodied sanctuary resident. Her long legs and ability to heighten her statuesque stance give her giraffe-like qualities. She is big, bold, and beautiful.

Looking at Toes today, it is hard to conceive the beleaguered shell of a being she was at the time she joined our family. In March of 2019, TOES was part of a neglect case under the management of the Columbia-Greene SPCA. She was one of eight female Thoroughbreds that Unbridled committed to take in. When we met TOES, she was exhausted,  worn to a shadow of her former self. Her skin shivered over a visible skeleton. Her manure caked coat was matted and scattered with patches of rain rot. She was about 350-lbs underweight and wasted to the point that her body had begun to feed on its own muscle.

Her untrimmed hooves compounded the pain of the infirmities she bore. While training and racing, TOES suffered a knee injury and bowed tendon, and trauma enough to calcify her ankle and fuse her pastern joint; all in her left front. She struggled to balance her lanky frame and what little weight she had on three legs, not four.

TOES earned a total of $244,905 from age two to five in 27 starts. As a registered NY-Bred she generated an additional $50,000 in Breeder and Stallion Awards. It is unfathomable that given her size she was sent to the races at age two. When her career concluded, she had tallied four wins, each with a different trainer; Mark Hennig, Linda Rice, David Jacobsen, and Robert Barbara. On the NYRA circuit she was jostled from stable-to-stable. What ailed her wnet unnoticed through the claiming ranks. TOES must have run on pure heart and determination. She was raced hard, frequently, and with injuries.

TOES spent the entirety of her career in NY, yet not a dime for her aftercare was set aside for her retirement, nor any provision made  by NYRA, NYTHA, or NYBreeders. Her story is that of untold thousands of racehorses who give every last drop of themselves for the asking, and when they are no longer 'useful' they cease to be worthy of support.

At Unbridled, TOES is beloved and celebrated. Her hugeness pales in comparison to her curious, gentle nature. She is always a favorite of visitors. 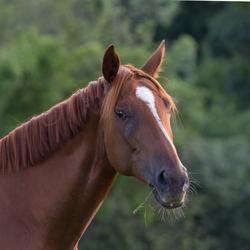