A full sponsorship is $500 per month per horse.

Any increment of that amount is a welcome gift:

Every day Secret Forest consumes about 15 pounds of grain and 1/2 bale of hay… Certain costs with horses are fixed no matter their lot in life… Whatever you can do to help would be joyfully received and greatly appreciated.

We promise that when you visit, Forest will greet you at the gate with oodles of huggles and smoozzles.

To make a one-time gift or recurring monthly gift to help Secret Forest you can make a contribution to UNBRIDLED:

​​​​​​​In gratitude, we’ll send you monthly digital cards and updates featuring Secret Forest, which you can print or email to a loved one who shares your love of Horses! 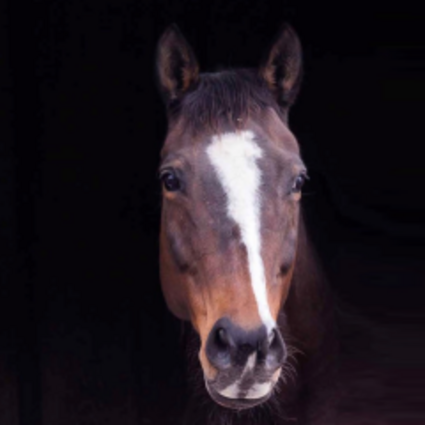 "Forest illuminates the faces and voices of all who make time to enter the generosity of her presence. In the serenity of the space and stillness she holds, hidden hearts enfold anew. There is something about her that simply invites your soul to grow"

"One of the most classy, kind, beautiful beings I’ve ever met —

Secret Forest emanates a healing energy that is palpable"

​Secret Forest is symbolically adoptable through sponsorship. Forest requires $20 per day for her care and well-being.  Your sponsorship of Secret Forest bears witness to the worth of her life. By sponsoring one of our rescued residents, you are helping Unbridled work toward a kinder world for all Horses through rescue, education, and advocacy.

Secret Forest was born on April 20, 2001 in Kentucky to the stead of Thoroughbred Breeder John H. Peace. Mr. Peace owned and raced Forest's mother Half Secret who he purchased as a yearling from Brereton Jones in 1985.

At the races, Forest won 3 races, accrued black-type, and earned $134,905 from 12 starts at age three and four. She was trained by George Weaver, and raced in the colors of Agnes Peace, the wife of her breeder.

In 2006, within a month of her retirement from racing, Forest was sold at Keeneland January as a ‘broodmare prospect’ for $600,000 to Robert E. Courtney Sr.

In 2010, during her fifth consecutive pregnancy, Forest was sold through Keeneland November for $100,000.

In 2015, while carrying her eighth and final foal, Forest was sold at Keeneland November for $3,000.

On April 14, 2016, Secret Forest gave birth in Pennsylvania to a Filly for breeder Cindy Dawson.

On January 8, 2018, thanks to the generous support of The Courtney Family and an awesome army of advocates, Unbridled purchased Secret Forest along with her best gal pal Pleasant Pastures from  Rotz Livestock in Pennsylvania. We bought their freedom and saved their lives from and unspeakable end.

A few weeks prior to landing in the 'Kill Pen' of Rotz, Forest had been shuffled through the New Holland Auction. At that sales venue her value had defaulted to the meat on her bones. When Forest was brought to our attention, her dignity had been exchanged for USDA label #1397. She had been weighed, tagged, and entered into the USDA databank for shipment to slaughter in Mexico.

We do not know who is responsible for sending Forest to New Holland. Her Jockey Club papers and a note stating that she had been in the company of a warmblood stallion for the past several months accompanied her transfer to Rotz.

Forest quarantined with Pleasant Pastures in Maryland, The two quickly earned the moniker, the 'Miracle Mares'. The betrayal they suffered forged an inseparable bond. To this day, neither is out of sight of the other.

The journey of Secret Forest is like that of tens of thousands of #ThoroughbredMares. When their breeding days are done, they are without protection or a bona fide retirement plan. Forest is one of the lucky ones, her past connections stepped up and she made it out of the slaughter pipeline.

Forest is loving life and thriving in sanctuary at Unbridled. She and Pleasant Pastures are inseparable, and we celebrate their bond as testament to the loyalty inherent in the breed. Together, they are are Teachers and Ambassadors to the wonderment, friendship, and true worth of Thoroughbreds.​