PLEASANT PASTURES  was to the manor born on May 17, 1999 at Marshall Jenney’s Derry Meeting Farm in Pennsylvania.

At two, she began training with Jonathan Sheppard who stewarded her career through 18 starts at age three, four, and five. PP garnered two wins in back-to-back victories at Delaware Park.

In 2005, four months after her retirement from racing, PP was sold as a ‘broodmare’ prospect at auction for $10,200 in Maryland.

In December 2017, a 'Kill Buyer' bought PP along with her best gal pal SECRET FOREST for pennies on the pound at the New Holland Auction  in Pennsylvania. When we discovered PP and Forest in the ‘Kill Pen’ they had already been tagged with USDA labels for shipment to slaughter in Mexico.

On January 8, 2018, thanks to generosity of the Courtney Family and contributions from compassionate individuals, Unbridled was able to purchase PP and Secret Forest.  Everyday we celebrate and honor their extraordinary bond with each other and the privilege we have enjoyed in saving their lives. 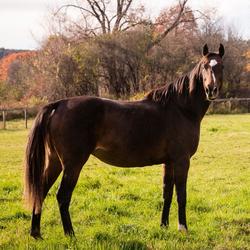