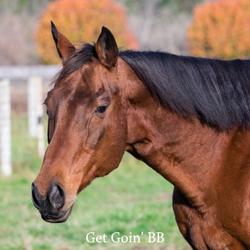 On June 5, 2018, Thoroughbred #483 stood alone in a kill-pen at sunset. His week was up, the deadline to make his bail had passed, and he was sorted for slaughter.

This Thoroughbred was exhausted. His right eye was deeply scarred, and a labyrinth of enlarged veins veiled his forehead and cradled his cheeks. Despite his blindness, withering stance, and an obvious lameness, in his under-saddle video he gave the last of himself to the prodding rider on his back.

Unbridled negotiated with the kill-pen late into the night to save his life. We were on edge until we could pick him up. He was so withered and weak. We feared for his ability to withstand the duress of the holding pen where a vicious clash can erupt to taste a sip of water. He simply hadn’t the strength to compete.

On arrival into quarantine the cadaverous Bay Gelding we redeemed was sick, emaciated, and suffering from a painful hoof abscesses. It was clear from the biography of disfigurements across his body that he had been used for experimentation; trials that left him riddled with fear and infirmities.

Who was this horse? The only clue was a tattoo that had faded into the mottled pigmentation under his upper lip, too dull and distorted to confirm his real identity. Jockey Club DNA testing later revealed him as GET GOIN’ BB, a sixteen-year-old New York Bred who won his only start at Finger Lakes.

When the pain of BB’s past takes him where he would rather not go, we embrace him with love and give him the space he needs to heal. With each passing day, one smoozzle at a time, BB is leaving the past behind and expressing his willingness to trust again.

At Unbridled, BB lives with FLEUR. She mindfully looks after his right side and the two share an inseparable bond that we are privileged to accommodate, celebrate, and honor. 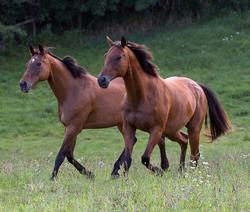 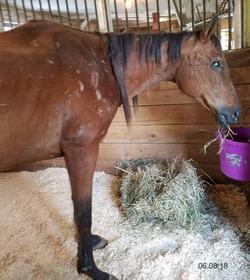